Animal health is Alistair Brown’s lifelong passion. Since he graduated as a vet from Murdoch University in 1987 he’s had a wide experience caring for animals. From pets to wildlife and from supervising animal ethics to farmed fish, he’s done it all. After graduation he spent a decade in the UK with animals and fish until he returned to Australia to work in aquaculture and nutrition in Victoria. As the one of the most experienced aquaculture vets in the Southern Hemisphere, he found himself is demand well beyond our shores, but he still found time to administer the vaccinations and veterinary appraisals for Trophy Pet Care as well as volunteer for wildlife rescue. Then, for a break from the corporate world Alistair bought the Trophy Pet Care business in 2015. Dr Brown getting ready to make a house call.

Trophy Pet Care, now Trophy Vet Care, as the name implies is just that; a full-on pet care service – “Not only do the pet owners get their food delivered but their fur-friend gets a professional once over. Whilst getting weighed and checked over and given their routine wormers, the client has the opportunity to express any concerns they might have. If they require house calls, if they require ongoing medication, it’s all provided through the Trophy Vet Care service. Any serious issues that require surgery, like the removal of lumps or a blood test, they’re taken to a fully equipped surgery from where I work part time. Or I can refer them to their local vet. We also have our own dry food. It’s a well-balanced ration and it’s been on the market for 20 odd years now. I also supply the LifeWise range should my clients wish that, which is also a product of Natural Balance”.

When asked about how nutrition influences the common ailments of pets, he stated that just as with humans, nutrition can influence many disease conditions of our pets, such as allergies and arthritis. “Itchy dogs are very common, and allergies can have a nutritional basis to them. Ingredients in a diet will have ramifications for the gut flora. If an animal has an intolerance to a particular ingredient, this can manifest itself as an allergy type reaction. When I see an itchy dog or one with persistent ear or skin infections, one of the first questions I’ll ask is what it has been fed. Then I’ll potentially go down the track of discussing diet manipulation or diet change with the aim of altering the microbiota. Altering the diet is rarely a quick fix in allergy cases, and is often a case of trial and error. However, any steps that can be taken that avoids the use of anti-allergy medications is well worth it. Using a high quality food like the LifeWise range in conjunction with a good probiotic has resulted in profound changes in the itchy conditions of many dogs. (further reading J.M. Craig (2016) Atopic dermatitis and the intestinal microbiota in humans and dogs. https://onlinelibrary.wiley.com/doi/full/10.1002/vms3.24)

Good nutrition is also very important for early bone and joint development. So ensuring that young animals are fed a food that is formulated to cover the dietary needs of young, developing animals is essential.

Joint disease, in many cases, is a natural progression of old age.   “I think now there’s evidence to suggest that giving the dogs nutraceuticals to support joint health before the onset of signs of joint disease can have benefits, particularly for the larger breeds of dogs. (further reading – Rivalli S. (2018) Recently highlighted nutraceuticals for preventive management of osteoarthritis. https://www.ncbi.nlm.nih.gov/pmc/articles/PMC6242728/)

Quoting from the UK Kennel Club: A hip score is a measure of evidence of hip dysplasia (abnormal development). Scores for each hip are added together to get an overall hip score for a dog. Scores range from 0 to 106, with the lower the score the better. The advice to breeders is to ideally breed only from dogs which score below the breed average.

Dr Brown emphasised how crucially important this safeguard was. Reading from his medical book, he said, “A score above 10 is an indication of growth instability or of clearly established secondary change. By not taking these simple precautions could lead to your dog suffering dreadfully in later life. Checking the parents’ hip score and making sure they get the right sort of food, especially as a pup when skeletal growth is a priority of nutritional uptake, plus, of course, plenty of exercise.

“The older the dog becomes, through wear and tear, the more severe the condition becomes and the more rapid the deterioration. Hip replacements are available but you’re looking at serious money; around $10,000 a hip. In an ideal world we’d only breed dogs with a hip score of zero, but certainly you’d not entertain using parents with scores of more than 10. And we’re seeing dysplasia issues with elbows as well”.

Another condition Dr Brown mentioned that has been in the news recently is canine dilated cardiomyopathy, (DCM). “This condition can be due to poor genetics but it can be related to feeding a poor quality diet. Recent research in the US is investigating the strong possibility that DCM is linked to dry food diets suspected of being deficient in certain amino acids – which are essential for good body function – so choosing a high-quality food is essential for maintaining your pet’s health”. 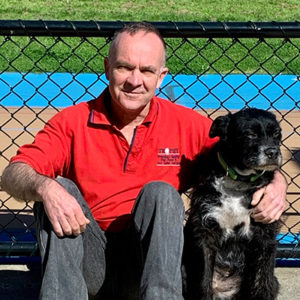 Alistair and Wookiee taking a moment in the sun

Asked if he found people were unaware of some of the health issues when they take on the responsibility of pet ownership, Dr Brown didn’t hesitate. “I suppose one of the biggest issues we see is obesity. You do have to be cruel to be kind in a way. When your fur-friend looks at you like they’ve been starved for a week, you need to resist that temptation to give them that extra treat or whatever”.

When asked if obesity was related to quantity or quality – if there were junk foods in animal nutrition – Dr Brown said it was probably a bit of both. “But it can be one of those compounding things. As dogs get older, their energy levels drop and they get slower, they don’t want to exercise with the same enthusiasm, that affects their weight, and so on. As a dog is slowing down with advancing age you have to address its dietary needs. I think the days of one size fits all with food are gone, and think you have to life-stage your dog on what they’re actually doing to a certain extent. With a few regular check-ups – weighing them obviously – you get a picture of where your dog is at; and then you should be tailoring its diet to what your dog needs, not what you think it wants”.

Another passion of Dr Brown is wildlife rescue. He regards it as a hobby, but he understates the valuable service and professional advice he provides for the dedicated volunteers who staff the wildlife shelters around the country. “I’ve got a dart gun licence and get called upon by wildlife rescue groups and government departments, such as Parks Victoria and the police, to sedate and relocate – mostly kangaroos that have wandered into suburban environments. Wildlife are facing an ever-increasing threat from urban development as well as environmental factors such as drought. Kangaroos are threatened from multiple angles – the pet food industry, housing developments, motor vehicles, dogs and foxes taking the joeys. One threat that is affecting an increasing number of kangaroos each year is phalaris grass toxicity”.

Phalaris (Phalaris arundinacea), or reed canary grass is an introduced species. It has been a popular pasture grass because of its salt tolerance, drought resistance and, because of its deep-rooted nature, as a soil stabiliser in areas prone to erosion. However, under certain conditions it can be toxic.   “At the moment we’re seeing a lot of phalaris grass toxicity. The damage is neurological and the signs are the kangaroos staggering all over the place like drunken sailors, the condition is typically progressive and will usually lead to death or at least make them vulnerable to predator attack (dogs and foxes). It affects livestock too, and in a farming situation you can treat the ground with cobalt, but in wildlife reserves, such as Plenty Gorge, budgetary considerations are issues preventing this remedy”.

Of the most difficult aspect of his job, Dr Brown said “It’s a biological reality that we typically outlive our pets and euthanasia is a painful step we all take at some stage. Obviously, it’s a very traumatic time for owners, saying goodbye to their pets. For a lot of people, their pet is actually a family member and they prefer to say their goodbyes in the home environment rather than the fairly sterile environment at a clinic, and it’s certainly available on request. We can arrange cremation as well”.

We are indebted to Dr. Brown for his comments. They were delivered with compassion and a healthy dose of common sense. Over his vast experience, he’s accumulated a huge bank of knowledge upon which the above comments barely touch.

Alistair Brown can be contacted at [email protected]