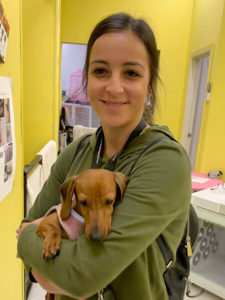 Ilena & Tilly were waiting to having Tilly’s toenails clipped at the salon.

The League of Pets started at Mt Waverley in 2012. As a sign of the times it opened in a building previously occupied by Blockbuster Video. It’s a prime corner site with ample room to display the wide range of pet supplies. Shane was involved in establishing the original store and when it was sold to Brooks and Monica in 2015 he stayed on as manager.

But it’s more than just another pet store. Grooming, wellbeing advice on a range of pets, and a rehoming service for cats are all part of the service. In a world where people are looking for value and service, League of Pets is a community hub for animal lovers and hobbyists, whether the animals have scales, feathers or fur.

Shane put it this way; “We’re able to feed the varied number of pets in the area. We have live food for reptiles, chook food, guinea pig food, fish food, and of course dog and cat food. We sell rabbits and guinea pigs, fish and canaries and budgies. Then there’s all the accessories that go with them. The shop’s well known in the Mt Waverley area and because of our competitive prices it is well patronised. We price match all the big boys in the market. That’s a big thing. We’ve got a lot of good customers; a lot of loyal customers. Seen here being groomed by Brooks, Pepper has been a patron of the salon for over five years.

“Our grooming service is a major part of the business. We have three groomers and we’re open seven days a week. We offer a pick-up and return service as well.   Brooks runs the grooming and we’ve nearly doubled the number of dogs we put through since he took over, and it’s still growing”.

There’s a free delivery service for orders over a minimum spend value and within 5km radius of the store, and in a theme common to family run businesses they support other local businesses. For instance, the insects they stock for the reptile fanciers are produced locally. Some of their fish and birds are produced by local breeders. “They’re not the cheapest, but they’re local and we support them”, Shane proudly said.

“We also run a rehoming service for cats. We’ve been doing it for over six years now, and in that time we’ve rehomed over 350 cats.

“But as you’d expect, our major lines are premium dog and cat food. Our best seller used to be another Australian brand, and we’d been supportive of them from the time they came on the market six years ago. It was a good product; I fed my own dog on it. I was virtually an unpaid ambassador for the brand. Personally, I think they’ve become too big. They’ve forgotten about the little person. They’re in it to make money; I understand that. I rang the owner and asked for support and he told me I’d have to deal with the distributor. That’s when I did some research and found out about LifeWise. I called Sales Director Kristy and she introduced us to the LifeWise lines. They would now be our second biggest seller after a well-known science line, and it’s chewing into that brand as well. We don’t tell people not to buy the others, but LifeWise is our go-to food. Because of the nutritional science behind the food and the personal service provided by the company, it’s the one we recommend. And like us, it’s a family owned, Australian company. Adrienne and Shane discussing the benefits of LifeWise.

“Personally, I prefer to sell Australian products. Imported food is irradiated, and we’ve had quality control problems. And with the imported products, the prices are always going up; three, five percent a year: non-stop. At the end of the day, when you buy a product made in Australia, it’s delivered within two or three days and generally they don’t run out of stock. And the people you’re dealing with are never further away than a direct phone call.

“People are now going away from imported food products. They want local premium products; that’s a fact. People do a lot of research on their products now. They shop with an iPad or an iPhone these days. They’ve already researched what they want before they walk into the shop. They’re looking for value; they’re looking for variety. And we can give them both. We don’t stock the supermarket range of foods; a) because there’s a supermarket across the road; and b) because we don’t believe in the supermarket range of products. In the long run, it’s easier to only sell the top-end range of pet food.

“One thing I’ve learned is that you’ll never know everything. There’s always something new coming through, some new science, some new product. I educate our customers to read what’s on the label. Forget about the gimmicky stuff that says brand X is the best because it’s in the vets. Or that brand Y is the best because a celebrity vet says it’s the best. It’s not. They spend millions and millions of dollars on marketing. They don’t need to spend that. The customer doesn’t hear that. They come into the store to talk one-on-one about their pet’s nutritional needs and the nutritional value of the feed on the shelves. That’s why this store’s doing so good, because we give the time to customers. “This is just the As & Bs” said Shane. Some of the 400 loyalty card customers on the LifeWise buy five and get one free program.

“The thing I find with the big shops is that they’re shareholder companies. When I go into one, there’s not the knowledge. I’m served by a casual staffer who doesn’t care about their products. It’s all about the margin. In our shop, we’re not concerned about the margin. We’re concerned about repeat business and we’ve got to work on turnover, not margin. We get that by being able to offer the sort of service and knowledge that brings pet lovers back through the door.

“We’ve just opened our website and as we’re in a Chinese area, we’re on We Chat. It’s like Facebook and used by the Chinese community. That’s where Monica comes into the picture. She looks after the website and the marketing. It’s huge for us. We have a weekly product that we promote. Generally at a loss, but it moves a slow line and brings people through the door”.

The League of Pets is well named. It conjures an association of like-minded souls seeking the best for the animals, birds and fish in their care. While we were interviewing Shane we had ample time to observe the professionalism of the staff and their friendly manner of dealing with people. We are proud to have The League of Pets as a LifeWise Ambassador.