Australia is noted for its community volunteers – the numerous service associations, the beach lifesavers, the rural firefighters, the Red Cross, St Johns Ambulance, and the CWA, to name just a few – but one that deserves kudos as much as any of them is the animal rescue sector. Thousands of people across this wide brown land unstintingly give their time to saving dogs and cats from council pounds that, if not microchipped, face euthanasia.

One of the rescue teams LifeWise sponsor is Starting Over Dog Rescue (SODR). We called on Ruth King at her Diamond Creek home for an insight to how their vast network operates. Their collection pool spreads across an area as big as a small European country. Try this for a territory: Broken Hill to Deniliquin down to Echuca; along the Murray to Sunraysia and into the Victorian Mallee as far as Ouyen. You’d need a vast network to cover that territory, wouldn’t you now?

It all started during the will-sapping Millennium Drought that started with the failure of the spring rains in 1996 and wasn’t broken till early 2010*. Ruth said dog owners in the region had no option but to take their animals to the pound. Trisha Taylor at Elsternwick had started Drought Rescue and Ruth, who was looking for a new dog, became involved and SODR evolved from that. It’s a registered charity and has 60—70 volunteer foster carers on their books and a dozen or so transporters. She started as a driver herself, but now finds herself pretty much tied down to the tedious, and ever increasing, administration and paperwork; in 2018 they rehabilitated and fostered 560 dogs. 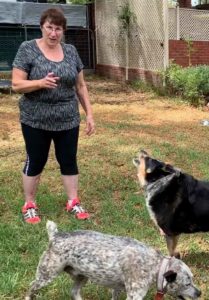 Play-time is important in rehabilitating rescues.

But SODR is more than just the numbers. Ruth tells of a bitch that was found paralysed on the side of the road nursing three pups. They paid for her to be treated and when she was fit to travel she and her litter were brought to Melbourne. The mother was fostered at Coburg and Ruth, whose staffie-healer cross Bolt is wonderful with puppies, took on the youngsters. When Janice Bell called from Coburg to say the mother was distressed and howling. Ruth loaded the pups into the car and took them to the mother, who was overjoyed to see them. When it was time to go she licked Ruth’s hand; the distress was gone. All she wanted was to know her babies were okay. You can’t say animals don’t have feeling, eh

The process is thorough. Ruth said it was based on trust to a degree. The pounds cast a preliminary eye of their intake and eliminate those animals deemed to be dangerous. Some are bought from the shelters by locals seeking a pet; SODR and the other ten or so rescue groups helping out in the region take the remainder. There’s no charge, but the rescuers guarantee they’ll worm, flea, de-sex, vaccinate and micro-chip their new charges. They also carry the cost of any veterinary or dental treatment required. Ruth told of a couple of recent cases involving cystine crystals and cruciate ligaments treatment had left them with vet bills in the thousands.

Finding the funds to keep the operation going is never ending. Bunnings sausage sizzles, and donations all help, but the main source is from sales. Puppies bring from $600-800 but some older dogs are fostered out at $50. As Ruth put it, “It’s a pension scheme; the young dogs have to subsidise the old dogs. LifeWise’s donation of feed has been such a blessing. It’s saved us a lot of money and enabled us to start a fund for a purpose-built animal transport van we can use instead of volunteers’ cars”.

When asked what help the rescuers received from councils they would have heard Ruth’s laughter in the next postcode. She said some contributed with microchipping and vaccinations; others charged for the vaccination before the dogs were allowed to leave the pound. But it was the ever-increasing paperwork that added to the cost and time spent on administration that had Ruth in stitches. “Sometimes a foster dog is returned after a few weeks if it doesn’t fit into its new home, but the full registration fee still has to be paid. The odd council is understanding and allows short term rego as long as the paperwork complies. It’s a drain on our limited resource”, she said. 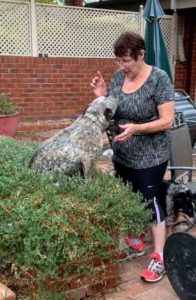 The scale of the animal rescue sector is huge. Ruth felt there was over 200 rescue organisations working around Victoria and Southern NSW. Their own operation had nearly 200 volunteers. “You can say what you like about it, but social media has been a tremendous boost for the animal rescue community”, said Ruth. Not only in recruiting volunteers and finding homes, but we had an instance where one of the councils had a new manager who thought she had a mandate to euthanise heavily. A social media campaign by local animal lovers soon had the council re-thinking its policy”.

Generally speaking, the councils decide that around 5% of the dogs they impound are beyond redemption. Ruth said at SODR gave an animal every chance, but if, after several months, their charges couldn’t get along with humans of other dogs they felt impelled to make the pragmatic decision in the interests of the continuity of the service. “There’s several people in our program who are excellent at bringing out the best in the rescued dogs. If we took 560 dogs a year, we wouldn’t put down five dogs a year. We won’t re-home a dog that is people or pet-aggressive.

“A fostered dog is on trial for a fortnight – to give it a chance to show its true colours. If there’s any doubts we’ll give the animal some training and the carer some ideas so they can do some in-house schooling. If that doesn’t bring them into line it’s off to boot camp for some full-time re-education”.

Starting Over Dog Rescue is just one of so many animal rescue organisations giving dogs that have been dealt a crappy hand a better chance. Ruth’s closing words were you’re never too old to be a carer or a volunteer.

LifeWise will be bringing you more of their stories on their website over the ensuing months. 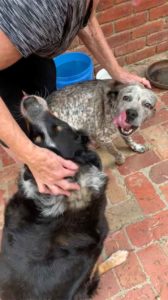