Not all dog rescuers are found in organised groups. Here’s a story of Vicki Curran, a fiercely independent individual who has adopted a pack of her own. 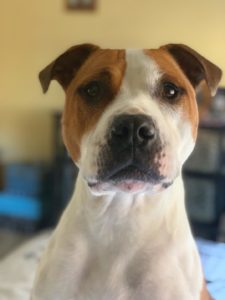 Indi, the dog who started it all for Vicki

Seven years ago she bought an American bulldog, Indi, through, who she later discovered, was a disreputable backyard breeder. “Poor Indi’s terrified of men. It was a learning experience for me”. Attracted to the style of dog, she came across a ‘good home wanted’ advert in the paper from a woman down in Moe, she added Diego the Staffie, to her household.

It was then that she ran across the Breed Specific Legislation (BSL). This was the act of parliament triggered by a number of maulings, some fatal, by American Pit Bull style of dogs. Under the Act, councils were empowered to seize any dog they felt looked to have Pit Bull in their breeding. She was walking her two dogs when a lady approached her to warn her that her dog, that looked just like Diego, had been seized; “The animal didn’t have to be a Pit Bull, it just had to “look” like it might be a Pit Bull”, Vicki said.

She was shocked. She was of a pre-computer generation, but in her research into the situation with which she was faced, she soon picked it up, which in turn led her to the world of social media networking.

“As far as the authorities were concerned, it didn’t matter if it was the nicest dog in the world, if it came within certain measurements that’s all that mattered” 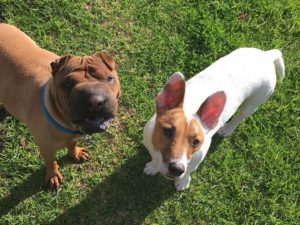 It was from here that she adopted two more rescue dogs: Russell, a Jack Russell/Bull Terrier cross and Poppy a mini Shar Pei. It was also then that she joined the fight to save Mylo a two-year-old American Staffordshire Terrier who became caught up in the “if it looks like a pit-bull it must be a Pit Bull” BSL pogrom. As Vicki put it; “As far as the authorities were concerned, it didn’t matter if it was the nicest dog in the world, if it came within certain measurements that’s all that mattered”.

Mylo had been impounded by the Brimbank Council under the BSL and spent two years on death row. Dogs on Trial helped with the court costs and supported the family throughout the appeal process. It took two years before the campaign succeeded and Mylo was joyful reunited with her family. Just as importantly, it also initiated a rethink of how these blanket regulations are administered. Vicki’s been a tireless campaigner ever since, and if you ever run into her, you’ll soon discover she’s one of those direct speaking, no-nonsense sort of people; the sort of person we could do with a lot more of. 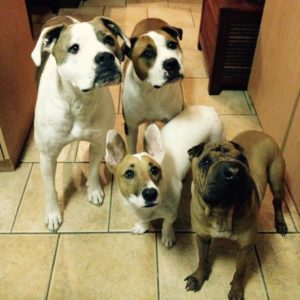 We first met Vicki here at LifeWise when she contacted Bill regarding skin allergies that were plaguing her dogs. Once she’d mastered the keyboard world she started looking into nutrition. “I’d been having a lot of problems with my dogs scratching. They’d start off on certain foods, they seemed to be OK, then it started to go wrong. It was just going on and on and on. And a lot of people were saying the same thing. I’d tried just about everything. I’d got into the raw food; I’d got into the vegan food; I’d got into the grain free food, I tried everything to help my dogs through this”.

It was a regular nightmare of a situation. “The Staffie had trouble with the inflammation around the groin, with skin flaring up all the time, so I got him off wheat. Then it was my American bulldog, anything fishy and she started to scratch. When I got them onto the vegan diet they all started to scratch. The Jack Russell cross was particularly bad. It wasn’t until the dietary problem was solved, and his full coat came back, that I realised how bad he’d been.

Russell showing he still has a spring in his step

“I’d taken him to the vet and he’d given him a Cytopoint injection. It was then that I came across Bill Wiadrowski and LifeWise. I’d been on Meals for Mutts, then I read that Bill had started up his own LifeWise brand after MfM decided to take food from a different manufacturer. I sent him an email with my allergy problems and the reply came back within half an hour with a detailed explanation of what could have been causing the problem and a recommendation of how to tackle it through nutrition. In view of the severity of the problem he suggested Vicki feed a single animal protein Fish (SAP Fish) diet that Bill had under development, together with Synbiotic 180S, a quality probiotic supplement.   It was just after the injection, and Bill said that it might be a bit better with the injection as it would shut everything down and give his body a chance to settle. It’s been three months now since that injection; they say that it should be every four weeks. It’s been amazing. He’s a different dog in every way; not only his coat but his general condition.

Vicki said she wasn’t alone in her plight to find a balanced nutritional routine for her dogs. “It’s amazing really, we read all that blurb on the packaging and pamphlets that’s written by marketing people, and we’ve been sucked into everything we’ve been told. I’m happy we’ve got it right now, and I’m truly grateful to have found someone who took a genuine interest in the problems I was having, and really cares about the animals he is feeding”.

For further information you can contact Vicki on vicki.225@hotmail.com