Mini’s Bulldog Rescue Club was started in Newcastle, NSW by Jay Harris in April 2015. Named after their first rescue dog, the organisation has nearly 18,000 Facebook followers and rehabilitates bulldogs from Queensland to Tasmania. For family reasons Jay had to hand the reigns over to his colleague Bridie Smith, who operates out of Sydney. Jenny McDonald and Karen Mansfield operate out of rural Victoria, which gives the organisation its strategic coverage. Last year, Australia wide, they forever-homed and fostered over 100 dogs; this year they are on track to exceed that.

Bulldogs have an ancient lineage. As the name implies, they were bred to participate in sports that are no longer mentioned in polite society, or as a method of handling the wild cattle of medieval times for the local butchers. (Times sure have changed, eh?) They were bred to be tenacious and have powerful vicelike jaws; a reputation that endeared them not only to the British, but right across Western Europe and in the New World. This has led to many breeds being bred to suit the needs of the various situations in which communities found themselves; from the small and popular “Frenchie” to her long-legged American cousin. They make loyal and friendly companion animals and Jenny and Karen love having them around.

While changing social values have played their part in the temperament of the breed there are some physical traits that linger. Like all flat-faced breeds they can be threatened by entropion; a condition that can cause corneal ulcers leading to impaired vision and even blindness. Another inherent trait in bulldogs and other dogs with similarly shaped heads is brachycephalic airway syndrome   Present from birth, it is usually diagnosed in the animal as a young adult, and certainly its symptoms of breathing difficulty are observed by age three. The condition is an elongated soft palate in nearly all dogs of these styles of breeds, and narrowed nasal passage in about half of them.

Correction is straight forward. In the case of entropion, a section of skin is removed from the affected eyelid to reverse the inward rolling; in the case of brachycephalic airways syndrome, the nasal passage is opened by removing small amounts of tissue. It doesn’t impair the dog’s sense of smell, in fact the evidence suggests it improves it. 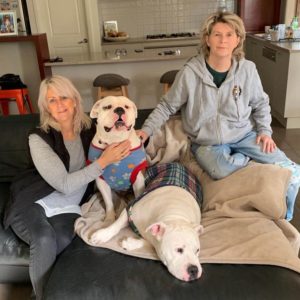 As with so many rescue groups, their primary effort goes into recovery and rehabilitation. “The issue with bulldogs is that when we get them as rescue dogs they need a lot of vet work”, said Jenny. “Entropion correction is nearly always an issue and many need their nostrils widened, particularly with some of the smaller breeds.

Jenny and Karen are sold on the breed.   “They’re great family dogs; they become part of the family: one hundred percent. Some of them are not dog-socialised. It’s just something you have to be aware of. It’s part of their old nature that some of them still carry from when they were protecting the family and the family’s livestock and property. If the dog’s one of the occasional ones that’s gone over to the dark side, we tell the fosterer. If they believe they can handle it great, but if they don’t, we find someone else”.

Most of their dogs are found in council pounds or by word of mouth. With limited capacity to deal with every bulldog that’s been orphaned, for one reason or another, the ones in the pounds get priority because of their precarious situation. They’ve flown dogs back from areas as remote as Mt Isa and Mackay as well us brought them up from Tasmania. For some reason, American bulldogs had a following in Victoria, hence the justification for the expense”.

As an example of how hard rescuers work, and how much emotion they invest, Jenny described what is involved in a remote operation. “It’s hard at times”, she said. “sometimes we might have four or five dogs on hold while we deal with pound dogs. It’s not just a matter of saying, okay, we’ll take the dog; what’s their temperament like; what’re the health issues? We have to arrange the travel. Some of these places might only have one flight a day come out. We have to find someone to get them from the pound to the airport, arrange their loading; then there’s the changeover in Brisbane or Sydney. They need to be walked a bit before boarding for their next leg down to Melbourne. All done remotely by the way. But before all that we have to have arranged a foster home for them down here”.

They can only go by what they’re told about the temperament and health issues. They have photos of course, but you can only get so much information from a photo. “Sometimes they might only have a poofteenth of bulldog in them, but that’s okay; we saved a dog’s life.

“Dog people are compassionate people and they generally know what they want. I haven’t seen a bulldog yet I haven’t like. Karen added, “People who’ve had one tend to have another”.

Skin allergies seem to be an on-going issue in the canine world. At the risk of stating the obvious, Jenny said, “You’ve got to find a food that’s good for them; a feed that’s not going to flare their skin up. With any bull breed, it’s trial and error a lot of the time. We don’t feed chicken. For some reason it causes issues with the skin. We don’t know what they’ve been fed from the get-go, but we like to put good food in them. The cost of the bag of food doesn’t matter, it’s what the dog needs that’s important”.

A brand they’d been on for some time changed ownership and the dogs picked up a change in the feed immediately. “It played havoc with our dogs’ guts. Bowel movements became loose”, said Karen. “And it wasn’t just us. Other bulldog owners told us they’d noticed the same thing. We tried the brand’s higher protein grain free diet which made no difference. We’re still not sure whether that caused the outbreak of acne – it was a yeast type infection – but when we looked it up, it ticked all the boxes. It came back to the feed. Toby even developed an ear infection at the same time.

“We spoke with Bill Wiadrowski at Bush’s Autumn in-store day and he suggested feeding the dogs a probiotic to get their microbiome back on track. The boys now get probiotics with their food. It’s really quite cheap when you consider the benefits”, said Karen. “Since we changed to LifeWise, it’s the first time Toby’s had firm stools. He was an old dog when we rescued him and inclined to run to fat. Now he’s in lean condition and bouncing around like a pup”.

Toby is an interesting case. He was one of the dogs that were rehabilitated from a scandalous, well-publicised situation. A case that makes you wonder how people can be so heartless. In short, he was a wreck when Jenny and Karen rescued him. Apart from the marked improvement in general health, one of the subtle changes since he’s been on LifeWise has been the brightness of his coat and the improvement in his skin. Karen said his coat lost that greasy feel and, as it became whiter, his skin pigmentation became more pronounced, making his spots more noticeable.

Pound rescues, because of the time element of their parlous position, and while they’re complicated, they have to be given priority Jenny explained. “Procedures vary from pound to pound. In NSW you have to sign a 16D and Victoria it’s called an 84Y. Sometimes they charge a $50 fee to get the dog out; other times they let it ride. The temperament is established by the pound. If they feel they’re a danger to the public, that’s it for them. We don’t adopt them out until all the necessary vet work is done; eyes, nose, whatever they need. If they don’t have a registration chip implanted, we get them vaccinated just in case. If they need fifty dollars’ worth they need five thousand worth. It’s all from donations – we had a stand at the Dog Lovers’ Show – and adoption fees keep things ticking over, but it’s the dog loving public who really make it possible for us to do this work. Our Facebook army are a big help; we’re eternally grateful”. 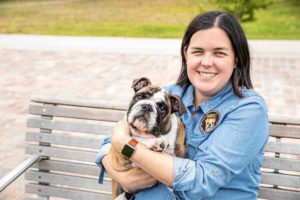 Bridie and her dog Cooper from Sydney

Jenny proudly said that next year – 2020 – is going to see Australia’s first American bulldog show. It’s has been organised by Shari Archibald of who runs Theora American Bulldogs, under the auspices of the Bulldogs Registry & Archives (ABRA). “We’re all very excited about it”.

Jenny described the work she, Bridie and Karen carried out as an expensive labour of love, of which there is no doubting. They certainly must be making an impact as they recently came second in the LifeWise ‘Vote For Your Favourite Rescue Group’ competition, and received a half a pallet of LifeWise dog food (16 x 18kg bags) to go with the honour.   Both of which were well deserved.